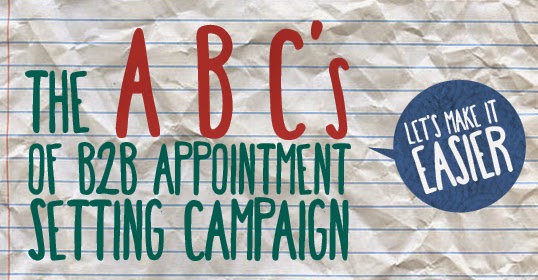 When the B2B marketing world and its complexities reach beyond what you can handle, you can only trust this simple advice—get back to the basics.

But here’s the rub: how do you get back to the basics of B2B appointment setting?

Getting back to the basics—it sounds almost so primal that we negate the idea even before our wildest thoughts could stray its shore. But here’s how to make it as easy as memorizing your ABC.

Ask the right questions. In setting business appointments with your qualified leads, your first few words will determine your relevance as a B2B marketer. Asking questions is a good way to start a conversation with your potential customers. However, your choice of words in formulating those questions will define whether or not you are worth their time and attention.

The tricky part is choosing what kind of questions to ask and how to ask them. Whatever your approach is, be smart in asking questions if you want to be deemed worth talking to.
Be innovative. I’m sure I don’t need to tell you what you already know. This may sound very generic to you but that’s what we intend here (talk about the basics, man!). While this advice has bored all salesmen in the world to their death, it sure did work for them.

Exhausting out your resources is different from expanding your options. Try this and that, and if you fail, try this and that again. Don’t just stick to what you know. It’s indeed never too weird to be different. Look for better ways to get your message across to your target without frustrating the hell out of them or boring them away to snoozeville. Your appointment setting campaign is just about as good as your preparation and innovative approach.

Create certainty.
“At the highest level, sales is about creating certainty in another human being…” The wolf of Wall Street, Jordan Belfort, says so himself.

·         Setting B2B appointments is all about convincing people that you have something they need, and that you are sure about it. Turning a potential client into a qualified sales lead requires an effort. It can take long, but it will pay off and you will be able to make back all that you have invested if you have a clear vision of the end-result and if you reach for it with sincerity. Personalize your message to show you care. People don’t care how much you know until they know how much you care. That is one fundamental dogma every professional appointment setter is expected to live by.

Setting appointments with qualified B2B leads is a tricky engagement. Just because a lead is “qualified” or appears to be your “ideal” customer doesn’t mean that it is ready to do a close-down business deal with you. That’s why before wasting your time running around the bush (read: making blind calls and praying for multi-million dollar sales engagements), get yourself educated first on the proper way of generating B2B appointments by understanding the basics. Good luck.

Posted by Unknown at 7:30 AM No comments:

How to Make Presentations for Business Appointments Interesting

When making a presentation for a business appointment, it's got to be something different. Not just mere phrases with bullets, this will surely bore your audience. As much as possible you got to make your presentation as lively as ever.

Break the ice and shave out the boredom by following these tips.

Learn how to change prospect's impression towards meeting and turn that sluggish discussion into a interactive conversation.

How to Make Presentations for Business Appointments Interesting from Belinda Summers

Posted by Unknown at 3:16 PM No comments:

A thing or two about running a business from Boardwalk Empire

No matter how history looks at mobsters, whether they are dismissed as murderous thugs or power-hungry businessmen, their influence on our culture – fictional or historical – is undeniable.
That influence is depicted in HBO’s Boardwalk Empire, a series set in Atlantic City during the Prohibition era. The show’s lead character, Nucky Thompson, is a politician who was able to rise to prominence because of his sleek business dexterity and charm.
Thompson is faced with organizational, legal and personal problems along with the ambition of staying afloat in his self-built underground economy.
Business owners and marketers can gain valuable wisdom from the premise of Boardwalk Empire:
Demand spawns business opportunities.
With the entire country prohibited to manufacture and sell alcohols for more than a decade, the demand for such was almost inevitable. Nucky saw this as a golden shot to make unprecedented profit and went on to amass power and influence in the process.
Not advocating underground and illegal means of doing business here, but it’s noteworthy to point out how businesspeople should be constantly observing their surrounding for potential rise of demand.
Value your connections.
Heads of organized crime groups have power that is more or less equal to the extent of their connections or ‘network of influence’. These are intangible assets that come in handy whenever strings need to be pulled to get something done.
In a way, your business connections can also help you achieve your (legitimate) goals, particularly lead generation. Your affiliation with industry authorities and influencers can provide you with the exposure and traffic that your business needs.
Don’t let your competition gain the upper hand.
It’s not just about getting more aggressive and putting more risk on the table. To really outsmart your competitors means learning about them a bit deeper and knowing the kind of weapon they have in their arsenal that they could throw at you.
Luckily you don’t need to hire goons and make them snoop around for information. In this age of information technology, almost everything is out there – you just need to know which information to pick and use.
Watch your movements closely.
Because of Nucky’s apparent bootlegging success, all eyes – federal agents, competitors, and just anyone who just wants a piece of the action – are on him. Still, he breezes through the pressure and drama of keeping his venture alive and kicking.


It takes real leadership and business skills to bring everyone aboard and share a vision for a company. A lot of distractions and hurdles may get in the way, but by operating wisely and carrying out well-thought actions, you could build your own business empire.
Posted by Unknown at 11:48 PM No comments:

Email ThisBlogThis!Share to TwitterShare to FacebookShare to Pinterest
Labels: business tips and strategies, how to run a business

It's better to invest with companies who can provide quality leads in a estimated period of time than those who promised to have fast return of investment but without a solid estimation.

There’s a reason why influencers are called as they are.
Not only do they influence people by means of dishing out valuable insights – in this case, marketing trends, techniques and just about anything that only experienced veterans can share – but they also influence fellow marketers by giving them a much-needed. albeit meager, share of the limelight.
Hence, it is important to be in constant knowledge of who these people are and how they can assist in your lead generation and thought leadership goals.
In the B2B Digital Marketing sphere, the top influencers every marketers should follow on social networking sites are as follows:
Jay Baer (@jaybaer) – President, Convince & Convert
Jay has consulted with more than 700 companies on digital marketing since 1994 including Caterpillar, Nike, and 30 of the Fortune 500. He was named one of America’s top social media consultants by Fast Company magazine and the Convince & Convert blog is ranked as the worlds #1 content marketing resource by the Content Marketing Institute.

Ann Handley (@MarketingProfs) – Chief Content Officer, MarketingProfs
Ann Handley is a veteran of creating and managing digital content to build relationships for organizations and individuals. She is co-author of the best-selling Content Rules: How to Create Killer Blogs, Podcasts, Videos, Ebooks, Webinars (and More) That Engage Customers and Ignite Your Business (Wiley).

Michael Brenner (@BrennerMichael) –  VP of Global Marketing and Content Strategy, SAP
Michael has  been working in leadership, marketing and sales roles for nearly 20 years serving a diverse group of industries. He is the Managing Editor for this SAP Business Innovation site. He is also the author of B2B Marketing Insider.